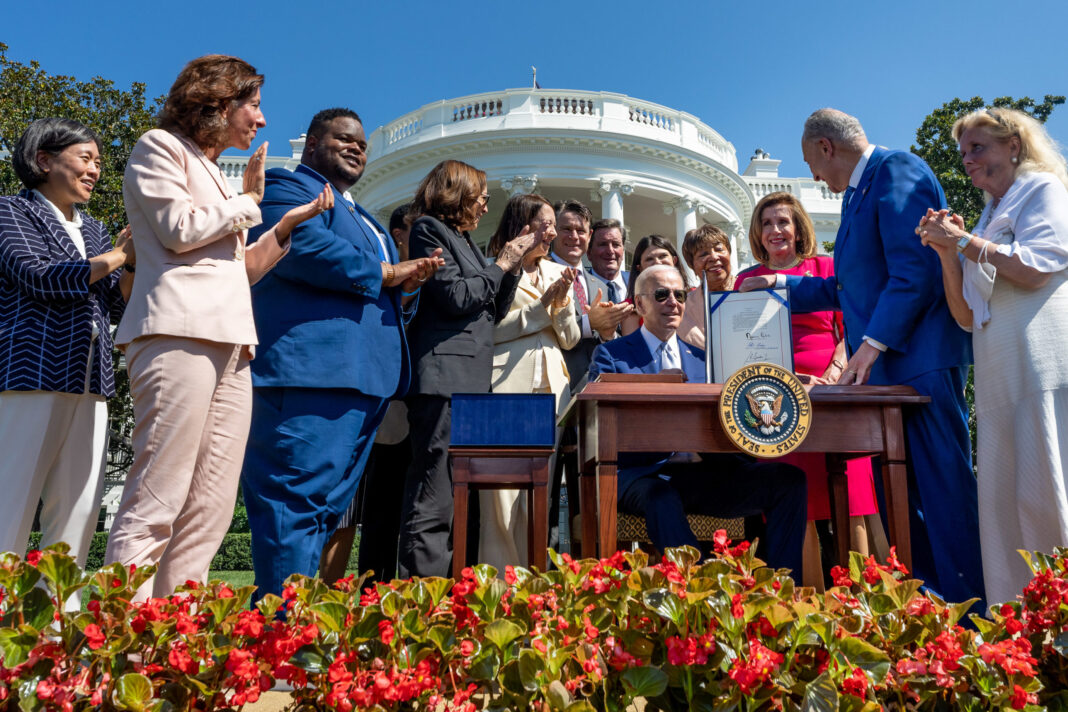 The new law will provide $52 billion to boost U.S. semiconductor production, along with $170 billion more for scientific research and innovation.

President Joe Biden officially signed the CHIPS and Science Act at the White House on Tuesday morning, declaring that “the future of the chip industry is going to be Made in America.”

Joined by an array of lawmakers, administration officials and industry representatives, Biden said that the new law will help reshore a critical industry, which will strengthen national and economic security and reduce inflation. And Biden used the ceremony to announce new investments from semiconductor manufacturers, which he directly attributed to the passage of CHIPS.

“American company Micron is announcing today that because of this law, it’s going to invest $40 billion over 10 years to build factories and special chips, called memory chips, that store information on your smartphone,” Biden said. “This investment alone is going to create 40,000 jobs and increase market share of memory chips by 500%.”

Micron was not alone in announcing significant new investments in American manufacturing, either.

“Two other companies, GlobalFoundries and Qualcomm, announced yesterday a $4 billion partnership to produce chips in the US that would have otherwise gone overseas,” Biden said.

Pelosi did not mince words when she said the CHIPS Act will let the United States “compete for and win the 21st century.” This investment is fundamentally about American manufacturing, Pelosi said, adding that these funds will “secure the tools the administration needs to identify, develop, and recruit our nation’s best minds” for high-paying factory jobs.

Schumer underscored the importance of chip manufacturing for American security, economy, and manufacturing, reminding the audience that the semiconductor was invented in the United States. Much of the design aspects of semiconductors also occur in America, and Schumer said that “with the CHIPS and Science Act, we can finally have the jobs, too.”

Semiconductors are in countless products used every day by all Americans. Cars, phones, and even dishwashers are equipped with these small chips that are smaller than a fingertip. But just about 12% of semiconductors are currently made in the United States, creating security risks and helping to drive ongoing supply chain issues.

Raimondo called America’s “our overreliance on foreign manufacturers is a real vulnerability.” She is correct; relying on other and often adversarial nations for critical supplies leaves the United States open to major economic and security risks.

“For years, my industry has been at the mercy of supply chains, making semiconductors that are critical to our chargers,” he said. “And I wanted to change that. That’s why, since day one, every single product that we’ve manufactured has been manufactured right here in the United States at our factory in Buffalo, New York.”

Funds made available by the CHIPS and Science Act will encourage more American companies to manufacture their chips domestically. Along with the new investments announced at the White House on Tuesday, companies like Intel also have pledged to invest heavily to boost U.S. manufacturing.

Biden pointed out that the United States once dominated semiconductor production.

“America had 40% of global production of these chips. And then something happened. American manufacturing, the backbone of our economy, was hollowed out,” he said. “We let semiconductor manufacturing go overseas and as a result today we barely produce 10% of the semiconductors despite being a leader in CHIPS design as well as research.”

Biden understands the positive effects building semiconductors in America will have on the economy and national security. In the face of record high inflation, the CHIPS and Science Act will only soothe some of the current economic concerns:

“Folks, we need to make these chips here in America. To bring down everyday costs and create jobs,” Biden said. “Don’t take my word for it. Listen to some of the business leaders here today and across the country.”

The message on Tuesday morning was clear: The United States must lead the way in advanced semiconductor manufacturing. This once-in-a-generation investment in scientific innovation will ensure that these products are not just designed in America but are made here, too.

You can watch this morning’s full remarks here.