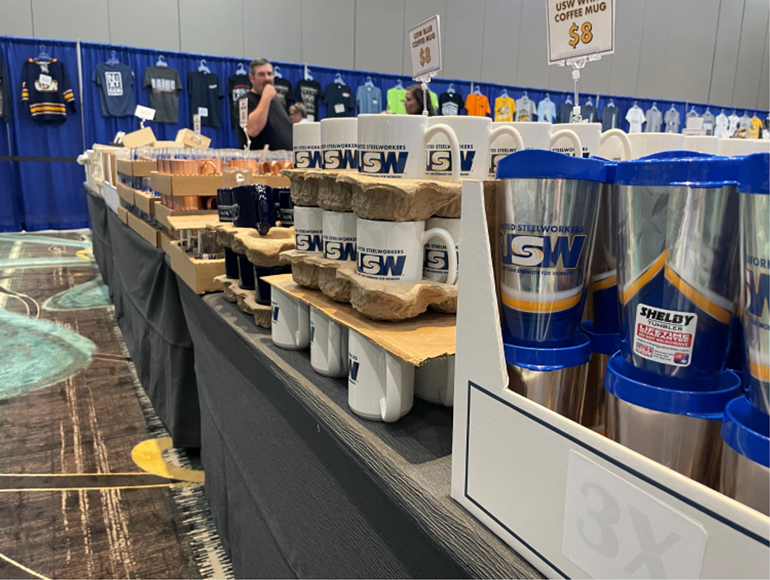 Our team is also at the big event, asking attendees about their favorite Made in USA items — and many of them are #USWMade, too.

The United Steelworkers (USW) are coming together for their constitutional convention in Las Vegas this week, the first time the full membership of the largest industrial union has met since 2017. Thousands of union members and their allies are in Sin City for the event, which is set to feature guests like Labor Secretary Marty Walsh, U.S. Trade Representative Katherine Tai, and AFL-CIO President Liz Shuler.

President Biden joined the festivities via video on Monday, and USW International President Tom Conway delivered the keynote address. The theme of the convention is “Everybody’s Union,” reflecting the USW’s diverse ranks. Not only do USW members come from a variety of demographic backgrounds, they also represent a wide array of sectors, from metal, mining, paper and forestry to health care to renewable energy to communications to newer members like baristas, football players, higher education workers, library workers, museum workers and more.

And Conway vowed to members that the USW will continue to organize new members, including in emerging industries like clean energy, electric cars, and retail. “If the pandemic taught us anything, it’s that workers are hungry for unions,” Conway said.

Conway pointed to the new wind turbine factory at Baltimore’s Sparrows Point as evidence that the new clean energy economy can be Made in America — and by union workers.

“At the height of the 1950s, there were tens of thousands of Steelworkers at that mill in Maryland, earning good wages that helped support families and communities throughout that region,” Conway said. “It’s been a decade since Sparrows Point closed its doors, but thanks to the work we’ve been doing with a company called US Wind, we are bringing back jobs at this historic site. This is significant in so many ways. US Wind is going to use this site to make the parts needed for their offshore wind development, and we’re making sure these manufacturing jobs throughout the clean economy will be good, union jobs.”

Conway also noted the COVID-19 pandemic “revealed some simple truths that we as union members have known a long, long time, but it can no longer be swept under the rug, things like the disgraceful state of our nation’s supply chains and how dangerous dependent we have become on other countries for our basic, life-saving necessities.”

For the past several decades, our nation’s manufacturing policy has been to reward corporate shareholders as they offshored factories overseas and “left communities across our nation to pick up the pieces,” Conway said.

But Conway had praise for President Biden, calling him the “most pro-union president we’ve seen in our lifetime,” noting that the commander-in-chief “is doing everything in his power to help working people.”

“He does this out of a sense of rebuilding our nation and to giving us back the economic base that we need,” Conway later added. “This is not just pandering to us, this is an honest, economic policy to rebuild our country.”

Conway pointed to the bipartisan infrastructure bill signed into law last year was a major victory for working people — and noted that USW members were critical to its passage. Now, it will be USW members who rebuild infrastructure.

“Thanks to our work, Steelworker members will be helping to build the broadband network in places like Colorado and Maine, build new highways in West Virginia, and bring clean drinking water to people in Michigan and Kentucky and so much more,” Conway said. “And with all of our union’s major wins, this was truly a collective one.”

The Alliance for American Manufacturing (AAM) team is also at the convention, connecting with Steelworkers about the importance of keeping good factory jobs in the United States. And we’re asking them what products they manufacture in the United States, along with some of their favorite Made in America products.

Here are a few of their responses thus far:

Cathalijne Adams contributed to this report.